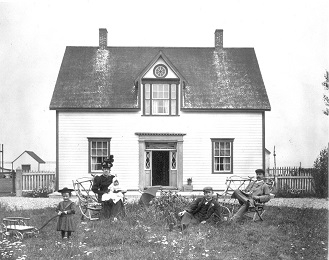 Fruing House is designated a Local Historic Place for its association with its original owner, W.M. Fruing & Co., and with the municipality’s first mayor, Alban Blanchard, as well as for its unique architecture. A company from the isle of Jersey named after its founder, W.M. Fruing & Co. had the house built circa 1870 to provide lodgings for its managers. Fruing operated commercial fishery establishments and had a fleet of schooners used for cod fishing. This house, still standing on its original site, is the sole physical vestige of the company’s presence in Caraquet. In 1918, merchant Joseph L. Blanchard purchased the home and left it to his son, Alban Blanchard, the first mayor of Caraquet, who used it as his personal residence. The house is a good example of vernacular architecture and exhibits traditional elements of that style, with its 1-1/2 storey rectangular plan and cedar shingle siding. A dormer with triple windows and bull’s eye is one of the remarkable features of this house. Other character-defining elements include its symmetrical front façade, rectangular main entrance, windows framing the door and glassed-in veranda.