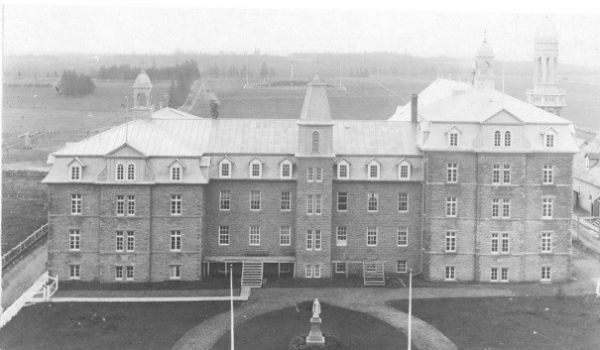 This site is designated a Local Historic Place for being the location of the Collège du Sacré-Cœur de Caraquet and its resulting association with education in northern New Brunswick. Construction of the Collège de Caraquet was started in 1894. Located across from the parish church and the Congregation of Notre-Dame Convent, it opened its doors in January 1899. The Eudist Fathers were responsible for delivering education and running this institution of higher learning. At the time, it was the only classical college in northern New Brunswick where Acadians could receive an education in their language. It received its university charter in 1900 as “Université du Sacré-Cœur.” Major additions to the college were built in 1903 and 1907 under the hand of architect Nazaire Dugas. The three-storey structure featured a tower at the centre of one side and a mansard roof. The college was destroyed by fire during the night of December 31, 1915, and subsequently rebuilt in Bathurst. The ruins remained standing until 1949. A regional school called “La Nacelle” was built on the original site in 1959. The building has since been converted into a cultural centre.