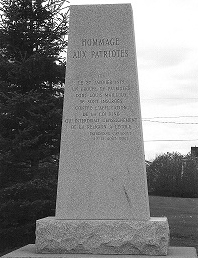 This monument, a polished grey-blue granite stele forming an elongated rhombus, is designated a Local Historic Place in recognition of Louis Mailloux and his 13 companions for their opposition to the Common Schools Act of 1871, which prohibited the teaching of religion in New Brunswick’s public schools. It was erected by Patrimoine Caraquet in 1986 on the former site of the house of André Albert, where the events of 1875 took place. In 1874, Gloucester County Council annulled the election of school trustees by the people of Caraquet and appointed three unelected individuals in their place who were all Protestant. Acadians in Caraquet strongly protested against this anti-democratic action and made their dissatisfaction known at a public meeting. On January 27, 1875, the government of New Brunswick sent a group of armed men from Miramichi to arrest the leaders of this opposition to the schools act. They attacked the house of André Albert, where some 15 men and women were gathered. Louis Mailloux was killed, as was one of the men from Miramichi, John Gifford. Joseph Chiasson was later charged with and convicted of Gifford’s murder. No charges were ever laid for the murder of Louis Mailloux.