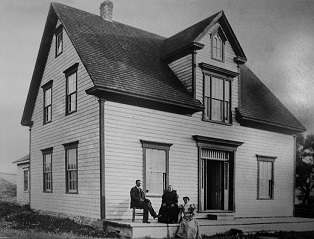 This house is designated a Local Historic Place in recognition of its architecture and association with its former owner. The name of Martin J. Légère is associated with the Fédération des caisses populaires acadiennes, of which he was the founding president. He was highly active in the cooperative movement at the regional and national levels. After completing academic and business studies in Caraquet, Martin J. Légère went on to study social science at Université Laval. He was one of the first managers of the Caisse populaire in Caraquet and the first president and CEO of the Fédération des caisses populaires acadiennes (1945). He remained a dedicated leader of the movement up until his retirement in 1981. Ever the patriot, he spent endless hours volunteering for service clubs and other local organizations in his community. Martin J. Légère House is also recognized for its architecture, providing an excellent example of the picturesque vernacular style used in Acadian communities throughout New Brunswick in the 19th century. Built circa 1898, this residence exhibits conventional elements of that style, including a rectangular plan and cedar shingle siding. It boasts several other interesting elements, among them its symmetrical windows, façade with glassed-in veranda and dormer with two period windows.