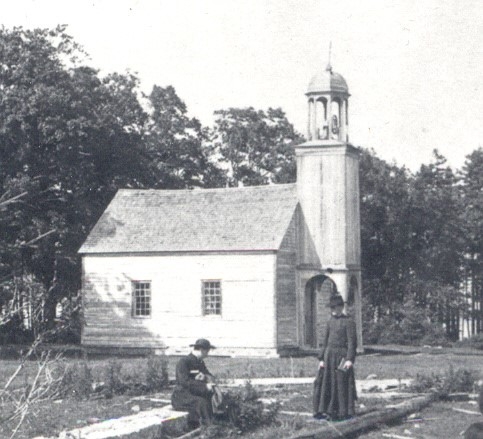 Sainte-Anne Chapel is designated a Local Historic Place for its architecture as well as its religious importance to the community. Called “Sainte-Anne-du-Bocage Sanctuary,” this has been an important pilgrimage site dedicated to St. Anne for more than a century and a half. Today, Sainte-Anne Chapel continues to provide thousands of Catholics an opportunity to gather for the novena on July 17 to 26 leading up to St. Anne’s Feast Day. A solemn mass is celebrated on August 15 each year to mark the Feast Day of Our Lady of the Assumption, patron saint of the Acadians. Erected circa 1840 in a grove overlooking Caraquet Bay, the chapel has undergone few interior changes, although the exterior has been renovated over the years and the building extended. This one-storey wooden structure has rectangular massing and a symmetrical façade. Character-defining elements of its exterior include a three-storey central bell tower with cupola and Gothic Revival windows.